Mexico is known for having one of the amazing cuisines in the world. One of the reasons why I keep returning to Mexico to travel, is because the food is so delicious and mouth-watering and I love sampling new dishes! What I love about Mexican food, is that most of it is all gluten-free (everything is made from corn and not flour)! As someone who has Celiac Disease (I cannot ingest any food or drinks containing gluten, wheat, flour, etc.), this is hugely important.

Every region of Mexico has their own specialties. They have different variations of dishes using corn tortillas, and unique combinations of ingredients for their sauces.

Here are some traditional Mexican dishes, desserts and beverages, and Yucatecan specialties, that I ate during my solo trip to Mexico this past May. These are some of my favourites! I recommend sampling these next time you find yourself in Mexico:

Tacos are the most well known and traditional Mexican dish. However, Mexicans make their tacos differently than what Americans and Canadians consider tacos. Hard shell tortillas are not used in in the making of authentic Mexican tacos.

Traditional tacos consist of a soft, flat corn tortilla, topped with a multitude of ingredients that could include various meats (chicken, pork, chorizo, beef, fish, etc.), beans, lettuce, cooked or raw onions, jalapeno or chili peppers and others. When you order tacos in Mexico, they are often accompanied with a variety of other toppings such as fresh limes, red pickled onions, radishes, avocado slices, cilantro, pico de gallo (fresh chunky salsa made from chopped tomatoes, onions, cilantro, lime juice and peppers) and spicy sauces that you can choose to add. There are many varieties of tacos, depending on the area of Mexico you are visiting.

I will warn you… the green sauce that looks like guacamole (which often accompanies your tacos in a small dish or is an option at the salsa bar), is not guacamole! It is a very spicy sauce, so don’t make the mistake I did and lather it all over your tacos. My mouth felt like it was on fire for quite awhile after that and nothing helped to calm it down!

I definitely recommend trying the tacos al pastor. “Al Pastor” is pork that has been marinated in a combination of dried chiles, spices and pineapple. It is slowly cooked on a vertical rotisserie called a trompo. When ready, the meat is thinly sliced off the spit with a large knife. It is served on small tortillas with finely chopped onions, cilantro, a small slice of pineapple, and topped with lime juice and spicy salsa. 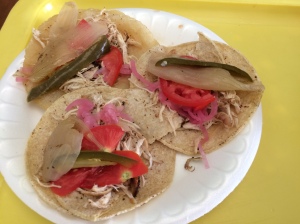 Chilaquiles are a popular breakfast or brunch dish. On the bottom, they feature lightly fried crisp corn tortillas which are cut into quarters. On top of that, is green or red salsa, then fried eggs, pulled chicken, and finally, fresh cheese, cream, raw onion rings and avocado slices. They are often served with refried beans and guacamole as side dishes. This meal is very filling! I ate this in a small family-owned “loncheria” (lunch eatery) in Tulum and it was absolutely amazing.

Guacamole is a sauce made from mashed avocados mixed with onions, tomatoes, garlic, lemon or lime juice, cilantro and chili peppers. It is most often served with fried tortilla chips for dipping. Authentic Mexican guacamole is like no other. It’s like they add a special ingredient, because every time I attempt to make guacamole at home, I can never get it to taste like the ones in Mexico.

An entire plate of guacamole at En Rincon Chiapaneca in Tulum

Sopes are a traditional Mexican dish originating in the central and southern parts of Mexico. The base is made from a circle of fried masa (of ground maize or corn flour) soaked in lime with pinched sides. This thick tortilla is then topped or stuffed with refried black beans and served with crumbled cheese, chicken, lettuce, onions, red or green salsa (made with chiles or tomatillos) and cream. Pickled red onions and pickled jalapenos can also be added on top or on the side. Salbutes and panuchos are the Yucatecan versions of the traditional sope. 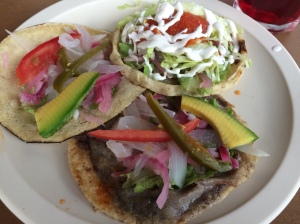 A panucho, sope and taco at La Selva in Valladolid

A panucho and a taco from the food court in Valladolid

Panuchos are a Yucatecan specialty. They are made with a refried or partially fried crisp corn tortilla that is stuffed with refried black beans, and topped with chopped cabbage or lettuce, pulled chicken, tomato, pickled red onion, avocado and pickled jalapeno pepper. They are often accompanied by fresh limes and habanero chiles. I ate panuchos more than once in Valladolid, at the restaurants La Selva and the El Bazaar food court. They were one of my favourite dishes!

This is a traditional Mexican slow-roasted pork dish originating from the Mayan in the Yucatan Peninsula. The meat is marinated in an acidic citrus juice (with red onions and orange juice) and seasoned with annatto seed (also called achiote). The achiote gives the dish its characteristic burnt orange colour and adds flavour. The meat is then roasted and wrapped in a banana leaf. I had the opportunity to sample this dish in Valladolid and the sauce was so tasty. The word “cochinita” means “baby pig” and “pibil” means “buried” in English, so true cochinita pibil will be cooked with a baby pig. This dish is usually served with corn tortillas, red pickled onions, refried black beans and habanero chilies. Traditionally, cochinita pibil was buried in a pit with a fire at the bottom to roast it (hence the “pibil” portion of the dish).

This dish is a signature specialty of the Yucatan state. It is comprised of a thin slice of pork, which is prepared in citrus marinade (a bitter orange sauce) and cooked over a grill. It is often served with a side of Mexican-style rice, warm refried black beans, chopped onions, and avocado slices. 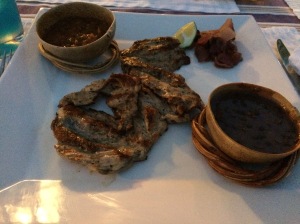 Arroz con leche means rice pudding in English. This is a popular dessert dish in Mexico. It is made from rice mixed with water or milk, cinnamon, sugar, egg yolk, vanilla, and raisins (soaked in rum or tequila). Chocolate, butter, lime zest or nutmeg can also be added.

Aguas Frescas are a popular, refreshing and fruity beverage. They contain fresh fruits blended with sugar and water to make a light, non-alcoholic drink. My favourite flavours included watermelon (“sandia” in Spanish), jamaica (made from steeping hibiscus flowers in warm water, but served chilled), strawberry (“fresa” in Spanish), and mango. They also come in many other flavours including melon, guava, papaya, banana and more.

Horchata is a milky drink made of rice and also includes ingredients such as cinnamon, vanilla, sugar for flavour. It is absolutely delicious! Once I discovered this drink in Tulum, it was my go-to beverage to order during every meal.

Huevos Rancheros are another popular breakfast dish that is composed of fried eggs served upon lightly fried corn tortillas topped with a tomato-chili sauce. They are often accompanied with a warm black bean sauce, Mexican-style fried rice, slices of avocado or fried bananas/plantains. I tried huevos rancheros at the El Bazaar (food court across from the main square) in Valladolid. They were one of the best meals I ate in Mexico and I continue to cook my own healthier version of this meal at home. You can find my recipe here. 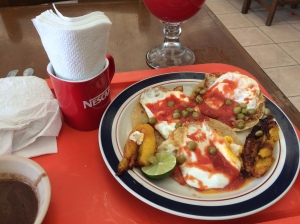 Ceviche is a seafood dish that is popular in coastal regions. It can be made with fish, shrimp, oysters or crab. I tried cevice in Tulum, which is a small town located on the Gulf of Mexico. There are a few popular seafood restaurants in Tulum; Barracuda and El Camello. La Malquerida, where I sampled my ceviche seen below, also sells it and it was delicious. It is made from fresh raw seafood mixed with citrus juices (lemon and lime) and spiced with chili peppers. Chopped onions, tomatoes and cilantro are added and the dish is topped with avocado slices.

Salbutes are similar to panuchos and they are also a Yucatan specialty. It is a puffed deep fried crisp corn tortilla topped with chopped cabbage or lettuce, shredded chicken, tomatoes, pickled red onions, avocados, and pickled jalapeno peppers.

Paleta is a Spanish word meaning “popsicle” in English. These Mexican popsicles can be found at places called “Paleterias y Neverias” meaning popsicles and ice cream. They are popsicles are made from juices, are sweetened with sugar and also include whole pieces of fresh fruit inside of them, and they come in either cream or water based varieties.

You can get “paletas de agua” which are made from water and fruit juice. The flavours can include strawberry, mango, watermelon, pineapple, guava and more.

You can also order “paletas de leche” or “paletas crema,” which are made with milk and fruits and other ingredients like vanilla, chocolate or nuts. These are creamy and milk-based.

There are many other dishes authentic to Mexico that I have yet to try, but I look forward to sampling more of them in two months when I return to Mexico!

Reading menus that are displayed in Spanish-only can be overwhelming at first, especially if you know little to no knowledge of the Spanish language. Menus in family owned loncherias (lunch places) are often displayed on a colourful piece of poster board with the menu hand-written in black felt market on it. It can be difficult to decipher what it says to begin with, and also what everything translates to! In these small eateries, most (if not all) of the staff will only speak Spanish. It’s very difficult to communicate with them and ask questions, unless you want to practice some of your Spanish and test it out with them. I was asked a question by my server at a small eatery in Tulum  (in Spanish) and I had no idea what she was asking, so I asked her if she spoke English (in Spanish, “Habla ingles?”) but she shook her head and said no. That was the end of that conversation and I will never know what she was trying to ask me.

I have included a helpful list of menu and food words and their translations, that you will likely see often on restaurant menus in Mexico. Hopefully this helps you to decode the mysteries of the menu and know what you are ordering.

Quisiera la carta, por favor = I would like the menu, please.

Puedo vera la carta, por favor = I would like to see the menu, please

Quisiera una mesa para (uno/dos/tres), por favor = I would like a table for (one/two/three), please

Tienen una carta en ingles? = Do you have a menu in English?

Quisiera la cuenta, por favor = I would like the check/bill, please

Estaba delicioso! = That was delicious!

Soy alergico/a (al gluten)= I am allergic to (gluten)

Tienen comida vegeteriana? = Do you have vegetarian food?

I highly recommend visiting these places when you are in Mexico.

Mexican food has such a variety of ingredients, spices and sauces, depending on where you go! There are so many dishes I still want to try.

What are your favourite traditional Mexican dishes? Let me know in the comments or on Twitter (www.twitter.com/SimplyTravelBlg)!

9 thoughts on “Mexican Cuisine To Sample in the Yucatan”

Follow me on my journey of simple living, as I pursue my passions and purpose, appreciate the little things in life, learn about our beautiful world and travel as often as I can.

I hope this blog inspires you to live simply, healthily and frugally while overcoming fears and barriers to exploring the world more often.

I will show you how to simplify your life, save money, plan and pack for your travels, and travel on a budget, solo, off the beaten path, slower and independently. 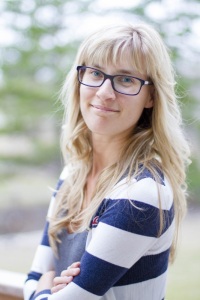 I am currently living and working in Stonewall, Manitoba, Canada.

Where Am I Traveling Next?